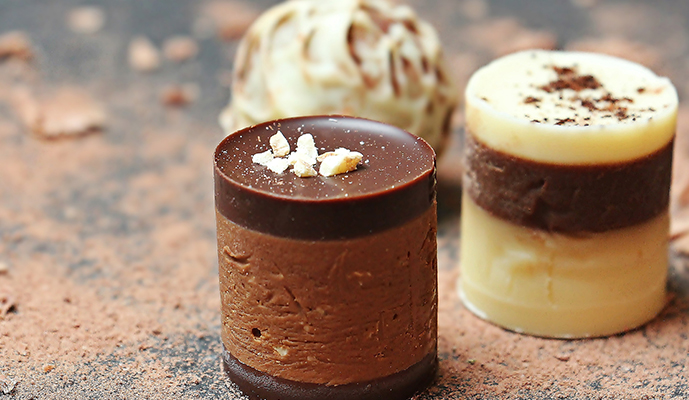 Traditionally, chocolate doesn’t feature highly in food in India or any of Subcontinental Asia. Most desserts are made from milk, butter, rice or fruit. However that hasn’t stopped Indian ingredients entering the chocolate market. The chocolate with chilli combination has been around for many years now with top chefs infusing chocolate desserts with chilli or the other way round — adding chocolate to savoury dishes like steak and lamb stews!

From bitter to fruity, woody to sweet, chocolate has a huge range of tasting notes which is why infusing it with exotic, unconventional ingredients can produce some magnificent flavours.

Here are some brands who have done exactly that Starting out with the very unique concept of putting chocolate into Bombay Mix, this British Asian brother-sister duo Asif and Nasrin Walia managed to sell their chocolatey Bombay mix in none other than Fortnum & Mason. After being quizzed repeatedly with, “Chocolate in Bombay Mix?”, this provided the inspiration for doing it the other way round —creating chocolate bars with Bombay Mix in it!

A few years later, they introduced new products in the ‘Delhi Mix’ range containing at least 20% of that savoury, crunchy and slightly spicy mix we all love. These include Dark Chocolate & Toasted Coconut and Dark Chocolate & Lime Delhi Mix. The Milk Chocolate with Indian Cinnamon deserves a special mention. A combination of cinnamon, milk chocolate and Bombay mix is a rarity and definitely worth trying. All Duke of Delhi products are handmade in London and with their colourful packaging they really an exciting brand to try.

Using cocoa sourced from West Africa and produced in London, Cocoa Hernando is the creation of entrepreneur Paul Tomlinson. On an epic train journey through Kerala in India, Paul had his most memorable cup of tea. Indian ‘masala chai’ on a rickety Indian train, gave Paul the inspiration behind Cocoa Hernando — connecting flavours to places. The aromatic notes of cardamom, ginger, cloves and cinnamon are combined with chocolate to produce this distinctive chocolate. The first of four flavours was developed — ‘Cocoa Hernando Discovers India’ — Masala Chai. Drawing upon his concept of emotive chocolate, other varieties were created like Himalaya and Syria.

Another British Asian brother-sister duo Roopa and Jay are the founders of Devnaa, which creates ‘Indian inspired confectionary’. The inspiration comes from their mother and grandmother’s Indian sweets. Whilst Jay travelled to India to find out more about Indian desserts, Roopa took a course in artisan chocolate making. Together they created their first signature barfi with couverture (chocolate made with extra cocoa butter to give a high gloss) Belgian chocolate, French milk powder and fresh cream. Now all their chocolates are made with this Belgian chocolate and Roopa still uses grandmother’s mortar and pestle when creating new recipes! As well as cute little chocolate boxes, Devnaa sell the very unique ‘Chai Drinking Chocolate’.

Rococo chocolates have been around since the 80’s and are synonymous with luxury and quality. Inspired by Roald Dahl’s character Willy Wonka, Chantal Choady opened her first chocolate boutique in King’s Road, Chelsea. She wanted to revolutionise the chocolate market by using ethically grown, purer chocolate. In 2014, Chantal was awarded an O.B.E. in the Queens Birthday Honours ‘For Services To Chocolate’. Rococo has incorporated Indian elements such as jasmine, cardamom and chilli pepper into their organic chocolate. One of the flavours that really stands out is ‘Cardamom Dark’, which is a creamy melt-in-the-mouth organic dark chocolate with minuscule crunchy cardamom seeds. I was immediately transported to the Subcontinent where cardamom is used in so many dishes, sweet and savoury. It also reminded me of sweet paan — (the green leaf chewed by many Indians) which has cardamom and fennel seeds.

The East India Company was established four hundred years ago and at its height was responsible for 50% of world trade. Their English merchants brought back exotic ingredients from around the world shaping some of what we eat today. Today the company is a luxury brand infusing many of its quintessentially British food products with diverse flavours. 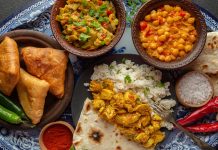 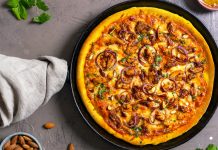 How to Store Your Spices

The History of Indo-Chinese Food

Load more
Kohinoor Joy
About Us

Indian Vegetables You Have To Try

Kohinoor Joy is sharing the joys of India through a journey of your senses. The one destination to talk, listen, watch, experience and share Indian food, culture, inspirations and lifestyle.
Contact us: info@kohinoor-joy.com
FOLLOW US
© 2017 copyright - Designed by Thump
MORE STORIES

Indian Vegetables You Have To Try

The magic of turmeric